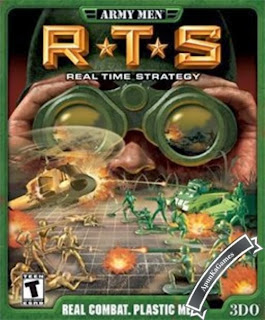 Army Men RTS is a video game in the Army Men video game series. In this real time strategy game, Sarge, his heroes and the Green Army are hungry to put an end to their arch nemesis once and for all, the tyrannical Tan army, battling them in 15 campaigns missions, 8 special operation missions and 8 great battles in 3DO’s farewell to this series. The Greenies hit dirt paths, linoleum floors and carpets and weave through flower beds, strewn boxes and toy train sets to collect plastic and electricity to build snipers to clear the field from afar or amass an army that overwhelms the opposition. The game is based on the movie “Apocalypse Now,” where the good guys hunt down an insane colonel, here Colonel Blintz.
Army Men: RTS’s gameplay requires the acquisition and extraction of two resources to build structures, vehicles and soldiers: plastic and electricity. Plastic, required for every construct, is taken from objects such as Frisbees, dog bowls and toys strewn about levels ranging from a front yard to a kitchen counter and even a basement. On destruction of a plastic object, a lump of plastic is left behind until a dump truck, the collector of plastic and electricity, slugs by and vacuums it. Electricity is drawn from batteries, toasters and walkie-talkies. Construction and upgrades of most buildings and some soldiers are contingent on some buildings having been built. For instance, at the onset of the game the resource depot, the processing facility, must be built so that dump trucks have somewhere to unload their collections.
Players use their resources to construct buildings and units. Because both factions have access to the same units, or infantry and vehicles, advantage lies at how they’re used. Some buildings assemble vehicles and produce soldiers and others provide defense. Production buildings can be upgraded to produce better units. Infantry troops are cheap to produce but are not as tough, while vehicles tend to be costly. Vehicles range from dump trucks and base-building bulldozers to helicopters, tanks and half-tracks to Dum-dums, suicidal robots armed with firecrackers. Aside from grunts and grenadiers, infantry units have a special tasks: Minesweepers defuse mines, snipers are deadly from distance and mortar men, especially three or more, rain ruination on buildings in short order. 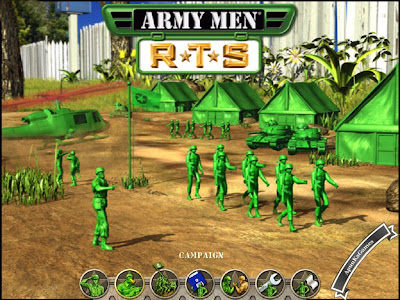 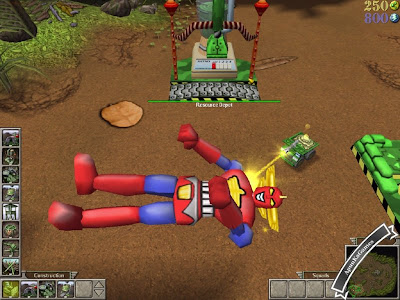 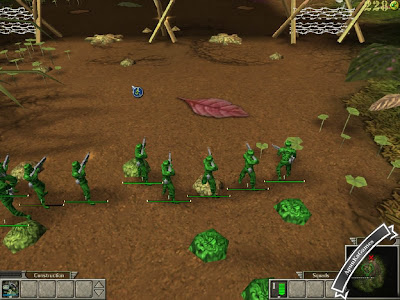